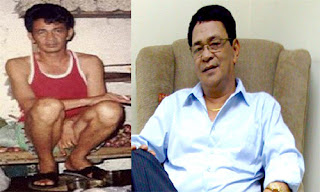 The product herbalist of REH Herbal is none other than Mr. Renato Herrera. He was a simple vegetable vendor in Balintawak back then. He was diagnosed of Diabetes, High-blood pressure and Lymphoma Cancer. Because of financial problem for he was just a normal vegetable vendor, he wasn't able to afford his daily maintenance.Because of this unfortunate things that happened to him, his own wife abandoned him to his own family in San Miguel Bulacan.

Helpless but not hopeless, he observed the eating habit of goats, because he realized that only goats were not affected by diseases. He made a mixture of these vegetables, leaves, seeds and even roots and faithfully drink it until he recovered from his ailments and this "mixture" is now the REH Herbal Supplements.

After his recovery, he aimed to help others who is suffering from different illnesses. He improved his mixtures of different fruits, herbs, and vegetables. He made his mixture into a ready to drink formulation to prevent and minimize the alteration and disintegration of nutrients naturally found in the raw materials used.

On 2000, he sent his herbal mixture to the Bureau of Food and Drug Administration to make sure that it will passed and qualified to the standard of BFAD and to proved that it is safe and no harm to used by human. And finally, the BFAD was approved his formula as "Food Supplement". As of now, REH Herbal Food Supplement is still registered in the Bureau of Food and Drug Administration with the LTO # RDII-RIII-F-2283 and also approved by FDA with FR#:95265

Free Delivery! Minimum of 2 bottles delivery. For more information you may contact our hotline:
09161227021